Delico (デリコ Deriko), is a Twilight and a member of the Monroe Family.

Delico is a fair-skinned young man with a lean build. His right eye is yellow and his left eye is blue due to heterochromia. He has light blonde hair that tends to cover his left eye, probably to hide that it is different in color from his right eye. He is almost always seen wearing a sharp black suit.

Delico has an earnest, quiet demeanour. He is extremely dutiful and works with unusual seriousness, often putting others’ concerns above his own. He tends to keep to himself and does not outwardly express his emotions very often. According to Yang, he has a timid side and will back down if he faces danger alone.[2] Despite his calm mannerisms, the generally negative attitude towards Twilights still bothers him on occasion.[3]

As a child, Delico lived in an orphanage, where he met his best and oldest friend, Yang. When the orphanage was attacked, several Twilights were abducted, including Delico’s younger sister, Erica. Delico is the only Twilight currently employed by the Monroe Family.

Delico is introduced in a battle between the Corsica and Monroe families. After finishing off some Corsica members, he notices Doug walking out of a nearby alleyway. Just as Delico realizes Doug is a threat, Doug attacks the group; Delico defends himself, but the others are not so quick to react. Leaving the rest of his team to care for the wounded, Delico moves to protect Monroe, warning Yang to watch out for any kids. Delico arrives just in time to defend Monroe from Doug’s attack, but is wounded himself. Then Nicolas appears to fight Doug, and Delico watches the fight silently. Despite his injury, he protects Monroe from another attack when Doug briefly switches his attention away from Nicolas. Later, despite being told to consult Dr. Theo, Delico has his wounds stitched up, claiming they aren’t severe enough to be worth bothering the doctor (much to Monroe’s apparent disdain).

On the way to meet up with Worick, Delico accidentally bumps into a young boy, who flees in terror when he realizes that Delico is a Twilight. Delico warns Worick that whoever is killing Twilights targets even high-ranked ones, so Nicolas may be in danger. Drifting into a reverie, Worick remarks that he hates Twilights, offending Delico despite claiming it as a joke.

Upon learning that Erica is alive, Delico resolves to go look for her. Though he originally plans on setting out alone, claiming that Erica is his problem alone, Yang insists on coming along, noting Delico’s timid side. Yang jokingly requests that Delico give him half of his salary for the next year. On the way out, Delico and Yang are sent off by Diego and Miles.

They ask around if anyone has seen Erica, but with no luck. Delico gets mistaken for Erica’s twin, which Yang lightheartedly suggests is based on Delico’s petite build (to Delico’s annoyance). They agree to search District 7 next. Just afterwards, Heather attacks them, mistaking Delico for Erica. Delico and Yang manage to convince Heather, who apparently knows Erica’s approximate location, to lead them to the eastern part of District 9. As Heather takes them through District 7, Delico happens to look up and see Erica leaping over the rooftops.

Delico chases after Erica, remembering times in the past when he couldn’t keep up with her. Unable to catch her, he later tells Heather he will kill Erica instead. After locating Erica, Delico and Yang leave Heather in an alleyway. Nicolas appears, wanting to coerce information out of Mikhail; Nicolas tells Delico that he will give him three chances to kill or capture Erica before he takes over and does it himself.

Delico approaches the warehouse in disguise to lure Mikhail out. As Nicolas fights Mikhail, Erica appears before Delico. Erica seems not to recognize Delico, stealing his tags as he pleads to her to acknowledge him. Yang and Delico attempt to subdue Erica before Nicolas is drawn into the fight as well. Noticing that the discarded drug capsules do not come from the usual Uppers, Delico wonders how Nicolas can fight so well. Delico and Nicolas manage to immobilize Mikhail, and then Monroe and Ivan appear.

Shocked, Delico demands to know why Monroe is with Erica; suspecting Ivan, Delico asks to be given the order to kill him. Monroe reveals that he was behind the attack on the orphanage as well as Erica’s kidnapping. Delico then demands to know what Ivan did to Erica; Ivan claims to have done nothing, but adds that “it’s been pretty weird to see a guy every morning who has the same face as the girl I fuck every night.”[4] Enraged, Delico reaches for his gun, but Yang stops him, lunging forward and aiming his gun at Monroe. Delico reflexively shoots Yang in Monroe’s defense, but soon realizes his mistake. Monroe, Ivan and Erica leave, and before long Heather arrives with help from Worick, Marco and Theo; Delico can only stare at his bloodied hands in horror.

Worick asks Delico to show him the wound so that he can stop the bleeding, but Delico tells him “it’s not my blood.” Delico spends the night on the roof of Theo’s clinic, where Heather joins him.

As a D/0 ranked Twilight, Delico's physical capabilities are not much greater than those of an average Normal. However, he has shown skills exceeding his rank, as seen when he managed to both protect Daniel Monroe and land a hit on Doug when the latter attacked (although he was also injured).[5] Additionally, Monroe consistently praises him for his skills and power, further proving his efficiency. 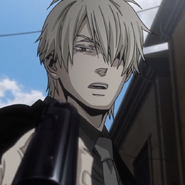 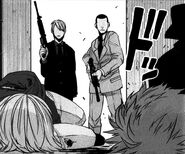 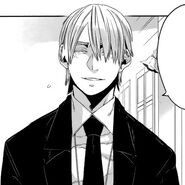 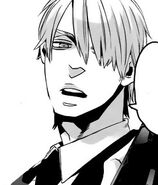 Retrieved from "https://gangsta.fandom.com/wiki/Delico?oldid=14048"
Community content is available under CC-BY-SA unless otherwise noted.