Loretta has long, curly, blond hair and brown eyes. With a slim, petite figure, her usual attire consists of a white shirt, brown bottoms, and a large bowtie around her neck. She usually wears black undergarments.

As family head Loretta can be calm, professional and stubborn under pressure. Despite the losses to the Cristiano Family she refuses to be intimidated. When not on duty she acts closer to her age, flustering at being called a child and showing a more temperamental side. Loretta is close to all her people and is generally informal among family, accompanying orders with childish gestures like flicking a subordinate's forehead and calling them affectionate nicknames like "big brother". Nonetheless, she takes her responsibilities very seriously.

Loretta is the head of the Cristiano Family, and the daughter of the former boss and the owner of the brothel "Bastard." She oversees the distribution of Celebrer to the Twilights. She is first shown at a meeting of the four families discussing the recent Twilight murders.

She can wield a gun with fairly good aim though she is a normal.

She uses a gun and appears confident in her ability. She is seen protecting Marco, albeit temporarily, from Erica during the attack of "Bastard". 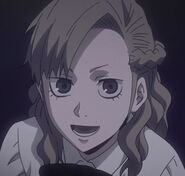 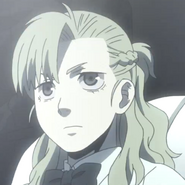 Retrieved from "https://gangsta.fandom.com/wiki/Loretta_Cristiano_Amodio?oldid=13704"
Community content is available under CC-BY-SA unless otherwise noted.