Minimi (最小, Saishō?) was a Hunter during the same time Marco was and appears in the spin-off series, GANGSTA:CURSED. and the only one in his team that chose his job.

Minimi has straight dirty blonde hair reaching down to his shoulders that covers his eyes a little. A noticeable facial feature is a scar that takes up most of the left side of his face. His Destroyers jacket is a jumpsuit that is open at the chest. He wears a low cut black shirt underneath with the sleeves on the shirt and jumpsuit rolled to the shoulders and a belt around the waist with a pouch attached at the back - which he uses to store vials of oil for his flamethrower. The pant legs are rolled up to mid-calves and he wears laced up boots. On his right hand he wears a glove that is a portable flame-thrower.

Minimi has a serious and quiet character. He claims to have no personal problems with twilights, yet he still possess little to no hesitation or remorse in brutally murdering and burning them to death if it meant earning money to support his family. 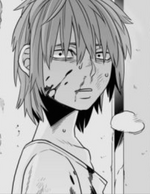 When he was younger, there was always someone at his home who was crying, whether it was his baby brother or his mother. His mother needed money badly to repay loan sharks and was desperate. One day, while the loan sharks came collect money from his mother again, Minimi, who was sick of the grief in the family, grabbed a kitchen knife and killed all of the loan sharks. He did this in order to bring peace once and for all to his family. His mother then smiled looking at the money she had collected from the dead men. [1] Minimi was satisfied at the result this brought and began killing people in order to rob them of money to support his family.

From there he began taking various mercenary jobs from behind the scenes to earn money for his family, but it was never enough. He was noticed and recruited by Maverick to be part of the second Destroyers and was promised a large sum of money. [2]

Minimi was one of the members of the Second Destroyers who launched their invasion on the city of Ergastulum fifteen years before the events of GANGSTA, with him being the one responsible for setting half of Ergastulum on fire, thereby forcing the Twilights out into the open and making them easy targets for the Second Destroyers. During the invasion, he, Maverick and Spas would eventually be separated from Striker and Beretta during their Twilight Hunt, where they would eventually be ambushed by Bruno, Sandra, Chester, Eva and Keith from the Paulklee Guild, who then proceeded to engage the trio in battle. Minimi in particular would engage Keith into battle and ended splitting up from Maverick and Spas. He would then fight the mercenary while running around the streets of Ergastulum constantly looking around searching for something instead of focusing on the fight, confusing the Mercenary. Later it was revealed that Minimi was in truth looking for twilights to kill while simultaneously fighting Keith, having set fire to several buildings and homes of twilights and killing several of them while battling Keith, angering the mercenary who then vehemently demanded if Minimi held some sort of personal grudge against Twilights due to a cruel act inflicted on him. Minimi in turn simply answered that he held no grudge or hatred towards twilights and simply saw the entire massacre hunt as a lucrative business venture, angering Keith further.

During the second half of their fight, Minimi successfully wounded Keith, who, in retaliation, managed to kick Minimi into an abandoned building upon noticing that Minimi's flamethrower had run out of oil. Keith in turn would then be side tracked upon coming into contact with his fellow mercenaries, giving the Hunter enough time to reload his flamethrower and prepare an ambush. Minimi then enhanced the lethality of his knife by heating it up with fire and managed to successfully fatally wound Keith in his abdomen rendering him immobile due to the blood-loss and the pain. Minimi then proceeded to burn the mercenary to death point blank with his flamethrower, but not before Keith tried one last ditch effort to kill Minimi by shooting him in the head with his hidden knife gun. However, Minimi managed to deflect his shoot and diverted it into instead landing on left leg.

Upon finishing off Keith, Minimi made his way back to Maverick and Spas, Having arrived just in time to save the latter from being struck by Bruno by throwing his Krambit knife directly on the Mercenaries neck, Minimi then stood by as Maverick beheaded the mercenary and watch as Spas defect from their mission and save Connie. Maverick then ordered Minimi to kill both Spas and Connie, an order that he complied to by trying to burn the two to death with his flamethrower. However, Spas having managed to get away just in time, he watched as Maverick branded Spas a traitor and a target to be eliminated by the Second Destroyers. Minimi then set fire to Bruno and the Raveau's bodies and incinerated the neighborhood.

Later he and Maverick proceeded to continue with their extermination/hunt of twilights, successfully murdering and killing several twilight civilians in the process. Minimi then began to notice that his body began to grow weaker due to being unknowingly poisoned by Keith. Minimi would also begin to notice Maverick's increasingly erratic behavior and her talks with "Abel".

The duo would then be noticed and engaged in battle against more mercenaries from the Guild: Neko, Arnold, Lien and Jared. Minimi would battle against Neko, Jared and Arnold while Maverick fought Lien, having the severe disadvantage of fighting against them, due to being outnumbered. He was further cornered due to Maverick leaving to search for Spas by "Abel". Minimi realizing it was impossible to reason with her, relented in Maverick's request on leaving. Minimi would then scatter the four mercenaries by setting off the exposed gas lines and creating a gigantic explosion, injuring Lien and Jared.

Minimi would then fight against Neko and Jared who managed to throw him into the air and nearly be bifurcated by Neko's axe in mid air. However, Minimi was then saved by Spas who attempted to dissuade him of continuing the mission, stating that Twilight were not monster needed to be killed, Minimi in turn would violently refuse to quit and warn him not to interfere and announced that whether it be humans or twilights he needed to kill, he would not stop now. Minimi then warned Spas that Maverick went off to find him and he should hurry if he wanted to stop her. Spas in turn would take on Neko in battle to help Minimi.

Later Minimi would engage Arnold and Lien in battle where the duo would notice that Minimi's movements have been strange and sloppy, only continuing to worsen during their battle due to him being poisoned. Arnold in particular would attempt to take advantage of this, pinning Minimi to the ground and gloating at him due to being angry for Keith's death. However Minimi had already long since realized he had been poisoned and how, so he instead used it to his advantage to lower his opponents guards and successfully stabbed Lien in the chest by throwing his Krambit knife at her. Minimi would then violently fight Arnold by burning his face with his Flamethrower and managed to successfully pin him to the ground. He then began to violently stab him to death with Lien's own throwing knife, all the while expressing his desire to survive and continue making money for his family. In a last ditch effort to kill him, Lien tackled Minimi to the ground in the effort to give Arnold the needed opening to stab him by running his sword through both their bodies. However despite this, the blow only managed to graze Minimi and not kill him.

The two eventually succumbed to their wounds and Minimi would then leave their bodies to continue his mission after picking up his Krambit Knife.

After being poisoned in his fight with Keith, Minimi engages both Lien and Arnold in combat, and while he ultimately wins killing both opponents he sustains significant injuries in the process.[3]

Shortly after the fight Minimi comes across a group of low level Twilights hiding in a tunnel killing them all but is visibly exhausted after doing so, having to brace himself on a wall afterwards, Keith's poison affecting him more and more. Minimi smells the scent of another twilight and heads outside to kill them as well but as he nears the exit he is ambushed by Nicolas, nearly killing him in the process [4]. Rather than fighting Nicolas, Minimi instead chooses to flee as even though he has faced stronger opponents and won, since the poison has left him vulnerable. While fleeing he reflects on the promise to return that he made to his little brother before leaving for Ergastulum.

Nicolas pursues Minimi across the rooftops forcing Minimi to fight, but as soon as Minimi turns his glove to Nicolas to try and attack, Nicolas stabs his right arm from palm to elbow, effectively cutting it in half along the length of his arm. Nicolas then kicks Minimi off the roof into a nearby wheat flour warehouse. Upon landing on his back Minimi realizes that he has lost all feeling in his infected leg, and now with his arm incapacitated as well, he has lost any chance of winning.

Nicolas then jumps into the warehouse after him, where Minimi retaliates by throwing a bag of wheat flour at Nicolas. The Twilight cuts the bag in half, which he assumes is Minimi's attempt at creating a smokescreen, but as the flour clears he sees Minimi sitting up holding his arm together with his flamethrower aimed directly at him. Realizing Minimi's true intentions, he jumps through the hole in the roof to flee. Minimi remembers a conversation with Maverick before the mission about how if he dies his earnings would go to his mother so he should focus solely on completing the mission even if it costs him his life. Smiling contently Minimi ignites his flamethrower, which mixed with the flour dust creates an explosion big enough to destroy the warehouse, killing him in the process. [5]

He is seen along with younger Striker and Beretta in Marco's recollections when he is preparing himself to fight the Third Destroyers to save Connie.

As a superhuman normal, Minimi is shown to be a very capable fighter, having been able to single-handedly win against rank A-2 twilights relatively easily, and despite being poisoned by a powerful neurotoxin, he was still able to fight several consecutive battle against high ranked twilights and win.

In combat he uses a portable flamethrower glove covering most of his right arm. As well as a TAC-TOPS Karambit knife (A variant of the Karambit knife that are used by the army elite), which he uses with such proficiency he's able to use it to deflect incoming bullets.

Retrieved from "https://gangsta.fandom.com/wiki/Minimi?oldid=14176"
Community content is available under CC-BY-SA unless otherwise noted.