Striker (ストライカー, Sutoraikā?) is a Hunter that is part of the current and previous incarnations of the Destroyers.

Striker is a tall, well-defined man with a sturdy, muscular physique. He has short silver-colored hair and dark skin, sporting a tongue piercing, three piercings on his left ear, a ring on his left middle finger and a tribal tattoo on his left arm respectively.[1] His default outfit consists of men's flat shoes, white capri pants, and a personalized version of the Destroyers jacket; sleeveless, revealing his defined arms, and fully zipped. When he was younger prior to joining the Second Destroyers, it was revealed that he possessed three bar-code tattoos on his left arm that was then presumably covered up by his Tribal tattoo.

Striker appears to be a very violent man who makes no pretense of his aversion towards Twilights. Despite being very driven in his actions, with more than mere willingness in his use of excessive force to get to what he wants, Striker seems polite when it comes to normals, apologizing twice for bumping into Worick.

In his youth, Striker was wild and erratic, unrestrained in his enjoyment of slaughter, no matter who his target was. In his adulthood, Striker operates with a calm and laid-back demeanor, even as he tears his way through anything in his path. However, this persona slips easily when Striker begins to enjoy a fight or enjoy terrorizing his opponents, giving way to the sinister grins and maniacal laughter he was well-known for before.

Perhaps the most unique trait among the Destroyers of any generation is Striker's obsessive attitude as well as his pursuit of an agenda of his own. Both in his youth and in current day, Striker took heavy interest in tracking down Daniel Monroe for unknown reasons, but the implications were not good. Given Monroe's eventually revealed allegiances, it is odd that Striker would want to hunt him down given that he was apparently hired by Corsica. Similarly, Striker has always harbored a perverse sort of admiration, bordering on lust, for fellow destroyer Spas, seemingly stemming from the latter's excelling at the violence he craves. Constance, Spas' object of affection, suffered particularly brutal treatment at Striker's hands, and when he and she escaped, Striker continued to hunt them with Constance in particular being a subject of Striker's wrath, indicating jealousy or perhaps more resentment that his former ally was living a different, civilian life.

Striker was a member of the Second Destroyers fifteen years ago alongside Marco Adriano, Beretta and two other members. Striker has a heavy resentment towards Spas after he left the group, as can be seen when he goes out of his way to fight Marco during the Destroyers' invasion of Ergastulum. Not much is known about the laboratory facilities in which Striker was raised, but when not engaged in slaughter, he would talk with Beretta or merely stare at a poster of someone else on the wall.

The defection of Spas, who later re-fashioned himself as Marco Adriano, left a deep impact and resentment on him, and he goes out of his way to torment and eventually kill him once the two have an opportunity to meet up again.

In Chapter 49, he is severely injured (as far as losing his left hand and maybe his left eye) by the trap scaffolded by Constance.

Striker is a dangerous fighter and is very proficient in hand-to-hand combat, as seen when he effortlessly stormed the Monroe Family mansion and subdued both Miles and Worick.[2][3] He possesses incredible strength and speed. Like Twilights, he possesses an enhanced sense of smell as evidenced when he smelled the cologne Worick put on from a considerable distance.[2]

Striker wields dual silver tonfa and is skilful in their use, being able to deflect bullets with them.[2] 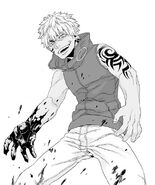 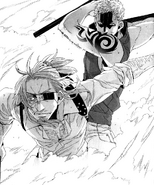 Striker on the phone. 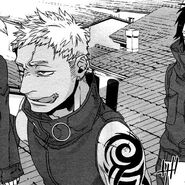 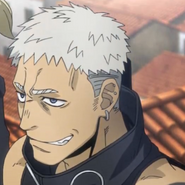 Retrieved from "https://gangsta.fandom.com/wiki/Striker?oldid=14288"
Community content is available under CC-BY-SA unless otherwise noted.